Does everyone have scoliosis? Will fitness and yoga make the spine deform? Can Scoliosis Be Prevented? This article cracks 12 scoliosis myths and helps you identify potential threats.

Scoliosis myth 1: Everyone has scoliosis, no one has a straight spine?

People often have the myth that everyone has scoliosis and that no one has a straight spine. Not really, poor posture does not equal scoliosis 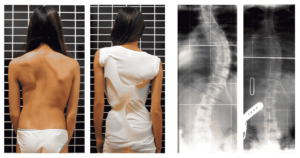 Scoliosis has a clear definition in medicine. Only when the scoliosis angle is more than 10 to 15 degrees measured by X-ray films can it be truly diagnosed as scoliosis. If it is only slightly curved, it is usually a poor posture, and it is not Classified as scoliosis.

People use the term scoliosis a lot. They believe that as long as the spine is not straight enough, it is called scoliosis. This leads to some friends with a slight deformity of the spine, mistakenly believing that they can actually magically straighten their spine. But this symptom is not true scoliosis. only bad posture. So it is one of the common scoliosis myths

Pigeon chest is the so-called convex breast, that is, the sternum protrudes; the funnel breast is the opposite, the so-called concave breast, that is, the sternum is concave. This is not scoliosis, but a structural problem caused by a congenital growth and deformity of the rib. This makes the patient’s physical appearance different from that of the average person, and it must be corrected through surgery.

Myth 3: Back pain is scoliosis?

Another one of the myths of scoliosis, it is generally known that the back and spine are painful, such as: common lower back pain or soreness caused by compression of the sciatic nerve. This is usually related to posture, especially if the posture has been bad for a long time. It’s easy to cause muscle aches and nerve compression, but it won’t cause serious large angle scoliosis.

On the contrary, if you have scoliosis, the age of onset of symptoms is usually earlier than that of people of the same age. For example: most people start to have back pain symptoms at the age of 27 or 8. But scoliosis patients may start to have symptoms of back pain in their 20s. At the beginning of the year, there are more obvious symptoms.

That’s because scoliosis creates more pressure on the spine, so the soreness is more pronounced and occurs earlier . Some patients ask: Why did I have no symptoms before, and why do I have symptoms now? That’s because the body’s stress exceeds its load, so symptoms begin to develop.

Myth 4: Sore back after exercising and running, is it scoliosis ?

Another common misconception about scoliosis myths is that some people find that their back hurts after exercise. Or after a run, they find that not only are their backs sore, but their knees are particularly uncomfortable.

If it is a scoliosis patient, due to the asymmetry of the body, it is easy to cause unilateral knee wear. And the pain will be more significant than the average person. At this time, it is necessary to further check to see if it is a potential scoliosis patient.

Myth 5: Does fitness cause scoliosis?

Fitness itself does not cause scoliosis , unless the force on both sides of the training process is very uneven, it may cause the body asymmetry of muscle imbalance.

However, there are often scoliosis patients who are doing heavy training. For example, when they finish squatting, they find that one side of the waist or one side of the knee is particularly uncomfortable. At this time , the possibility of scoliosis is very high, because the two sides of the body are asymmetrical. , The symptoms will begin to show if the effort is improper. Especially in recent years, the trend of sports has become popular. Road running and fitness will make the symptoms of potential scoliosis patients more obvious.

Myth 6: Does yoga cause scoliosis?

In the same way as the above fitness, practicing yoga itself will not cause scoliosis. Because yoga movements usually try to achieve bilateral symmetry. However, if you are a scoliosis patient, you will find that when you do some yoga movements. The symmetry and coordination of the two sides are obviously different.

Therefore, when you are exercising, if you feel obvious incongruity on both sides of your body, it is recommended to go for a scoliosis check!

You May Be Interested In:Mild Scoliosis of Lumbar Spine

Misunderstanding 7: Pregnant women and mothers feel special back pain when holding their children. Is it scoliosis?

If the mother herself has scoliosis, the asymmetric strength on both sides of the body will be more obvious. And the back pain will be more easily manifested. Especially when you have to hold a child after giving birth, you will definitely use the unilateral side that your body is used to for support. Because switching to the other side to apply force will feel very uncomfortable. Resulting in more pressure on the original scoliosis area. So the soreness will become worse. more serious.

If you find that you have unilateral back pain, you must go for an X-ray. If you are diagnosed with scoliosis, you should learn how to correct the scoliosis according to the state of your scoliosis, and hold the child in the correct posture. In this way, the symptoms can usually be controlled well.

Misunderstanding myth 8: The masseuse said my back is uneven, is it scoliosis? Dumbest scoliosis myths

However, this is only the preliminary observation of the masseuse, and the body is lying flat during the massage, not bending down for clinical examination, so the back protrusion may be caused by the imbalance of muscle tension. It is still recommended to return to the most primitive physical examination. X-rays can confirm whether there is scoliosis!

Myth 9: Some children are always slouched and scolded by adults for poor posture. Is it related to scoliosis?

This is a child with hypotonia, so if the child looks like a cartilaginous head, it is difficult to sit and stand. The more serious situation is called hypotonia in medicine. It is easy to cause poor posture. Further treatment is available for this condition, but in general it is not directly related to primary scoliosis.

Most teeth grinding is more related to stress than scoliosis. Maybe because of the high pressure, you can’t relax and sleep well at night. And it is easy to have teeth grinding symptoms.

But with scoliosis, some people do grind their teeth at night. However, scoliosis patients do not necessarily show symptoms by grinding their teeth. They often have problems with the TMJ joint, that is, when the mouth is opened, the time sequence of opening the joints on both sides is different. Or the cheeks are sore and painful.

Last one of scoliosis myths: Can scoliosis be prevented?

Scoliosis cannot be prevented because it is an underlying problem. Only through early detection and early treatment can we slow down the accelerated deterioration of scoliosis due to insufficient treatment information.

It has been found clinically that patients with scoliosis generally have a misconception. When they find that their shoulders are high on one side and low on the other, they usually begin to fantasize. If the low shoulder is raised, can it be corrected? In fact, the shoulders are placed on the spine and rib cage. If you simply lift the shoulders, it will turn into a shrug that will not solve the underlying problem of scoliosis, and will not help with treatment.

It is recommended that scoliosis patients really understand their scoliosis condition and debunk scoliosis myths, learn correct living habits and training methods, and then really treat the root cause!

Do you have any questions about health and wellness? We pay attention to Fitoont telehealth, and the consultants of doctors in Fitoont will continue to provide you with professional health knowledge!

I'm Kyrillos Mina, CEO and founder of Fitoont. I work as a physiotherapist, I created this platform to treat people with all the diseases and symptoms that physical therapy treats. In addition, I will provide tips to lose weight through diet and exercise plans.