Shoulder pain radiating down arm to fingers is a fairly common condition and called “Cervicobrachialgia” that causes pain in the neck that radiates down the arm and can reach up to the fingers.

Usually this pathology is one-sided and the symptoms range from burning to tingling and paresthesia of the hand or some fingers. It is a disease that has a very widespread epidemiology and does not differ between male and female subjects, it can be congenital or acquired origin. It usually affects people between the ages of 30 and 55, while it is rare in young patients. The causes of cervicobrachialgia are due to a compression of a nerve root at the exit of the cervical spine or to a compression of the brachial plexus. The brachial plexus represents the nerve network responsible for innervation. Both sensory and motor, of the upper limb (the arm), which controls the muscles of the shoulder, arm, elbow, wrist, hand and fingers. These are nerve roots which, at the exit of the cervical spine, intertwine and branch to form the 5 main nerves of the upper limb and are:

According to the level of compression of the nerve root, the localization of the symptoms will change. Cervicobrachialgia C5 sees as its origin the nerve root present between the C4 and C5 vertebrae characterized by twitching in the biceps.

You May Be Interested In: Should I Use Ice or Heat For Neck Pain?

The causes of shoulder pain radiating down arm to fingers are numerous and affect the nervous system. Among these is the compression of the nerve root caused by a protrusion, herniated disc, a decrease in the height of the disc.
As a consequence of the intervertebral foramen, a stenosis of the medullary canal, the nerve crushing caused by the clavicle which is lower than the first rib, a compression due to an exaggerated size of the transverse processes of the first dorsal vertebra (thoracic outlet syndrome), or formation of adhesions along the connective tissue that traps nerve endings and causes radiated pain.

The most common cause of cervicobrachialgia remains nerve root compression caused by a cervical herniated disc or protrusion.

We can define the latter condition as one of the first stages of herniation. In this case the nucleus pulposus migrates outwards, but remains well trapped in the fibrous ring without damaging it. This growth can still press on the spinal cord or spinal nerves causing cervical and brachial pain. Cervical disc disease mainly affects the discs located between the C4-C5, C5-C6 and C6-C7 vertebrae, all vertebrae at the base of the neck. On the other hand, it is impossible for the C1-C2 vertebrae to suffer from this disorder since they do not have the intravertebral disc that could compress the nerve.

Causes of Shoulder pain radiating down arm to fingers In human anatomy, the expression “thoracic outlet” refers to the physiological (therefore natural) narrowing delimited by the first rib, the clavicle, the scalene muscles (median and anterior), the subclavian muscle and the pectoralis minor muscle, inside which run the system of blood vessels artery – subclavian vein and the aforementioned brachial plexus.

In medicine, thoracic outlet syndrome is the name of the set of symptoms and signs deriving from the compression of blood vessels and/or nerve structures passing through the thoracic outlet.

Shoulder pain radiating down arm to fingers can be a consequence of thoracic outlet syndrome when the latter also involves compression of the nervous structures passing through it (and belonging to the brachial plexus).

In these circumstances, cervicobrachialgia is the result of a nerve compression located further downstream, compared to the situation described above (cervical radiculopathy); it is interesting, however, to point out to the reader that, despite this difference, the outcome is superimposable, including pain in the neck, shoulder and along the entire upper limb.

The symptom that characterizes how much pathology is the average pain that radiates from the neck to the hand. Symptoms usually manifest as pain in the right arm or pain in the left arm, hardly affecting both limbs. The neck is rigid in rotational movements. Shoulder and arm mobility also decreases.

The hand, on the other hand, presents with a very annoying tingling and/or paresthesia of some fingers. This condition also alters the sleep-wake rhythm, preventing the patient from staying in bed all night.

When the cause of cervicobrachialgia is a herniated disc, its compression on the nerves will cause:

It should also be noted that patients with “shoulder pain radiating down arm to fingers” often have a greater susceptibility to sensorimotor stimuli on the whole body and in particular on the suffering upper limb, clearly when compared with individuals not affected by the same disorder.

To diagnose cervicobrachialgia, in addition to a physical examination that involves a series of orthopedic and neurological tests, this pathology is confirmed by doing an MRI of the cervical spine. Before proceeding to the single diagnostic tests that can be performed, the doctor will analyze the overall picture by checking the strength, reflexes and amplitude of the movement of the arm.

If the pain radiating down the arm is caused by a herniated disc or a protrusion, the painful condition worsens when the neck is pressed or the limb is pulled, which allows the doctor to understand the pain and origin of symptoms.

Tests to detect The Pain

Some tests to understand the origin of pain include the Bakody tests (raising the arm above the head to decrease pain), Brudzinsky (cervical flexion while lying down), Jackson (which consists of seeing the response of the body by compressing the neck and placing it sideways). If the problem is caused by a herniated disc on the right side, the pain will only affect the right side of the body. Otherwise, if the protrusion or hernia presses on the nerves from the left side, the pain will affect only the left arm.

Very large and central hernias can cause symptoms in both arms, but also in the legs, a very rare condition. Among the tests most used to diagnose this disease are magnetic resonance and CT scans, which allow us to have a general and well-defined picture of the state of health of the intravertebral discs. Radiography, on the other hand, is not suitable, except in cases where a fracture or vertebral slipping is suspected.

Following the identification of the causes, it is important that the Chiropractor immediately submit the patient to a treatment to relieve the symptoms (having been careful of the cause and having ruled out any contraindications). Vertebral manipulations have proved very effective in treating this pathology, allowing the nerve root to be decompressed and the body to heal spontaneously.
Before treatment measures are started for a shoulder pain radiating down arm to fingers, the doctor should clarify with the patient exactly what he wants from the therapy and what he can and would like to contribute to it. The treatment of a cervical syndrome is much more successful if the person concerned is motivated and wants to take care of the matter consciously. Additional diseases such as depression make this access to healing more difficult.

If there is a willingness to undergo therapy, the following measures can be considered:

If you want have a free consultation with our physiotherapists click here please: Physical Therapy Services

Pain killers only treat the symptoms of shoulder pain radiating down arm to fingers, but not the causes. If at all, medication should only be taken in low doses and over a short period of time after consultation with the doctor. Non-drug therapy using physiotherapy and remedial gymnastics has proven to be much more sensible.

Exercises and home remedies to relief pain:Shoulder And Neck Pain On Right Side Home Remedies

What Do Tingling and Numbness Cause?

Tingling and a sense of numbness along the upper limb are symptoms that depend on an alteration in the sensory component of the cervical spinal nerves (in particular, the suffering resides at the level of the roots or the immediately following nervous tract).

What Does Muscle Weakness Cause?

In the presence of cervicobrachialgia, muscle weakness of the upper limb is a symptom that depends on an alteration of the motor component of the cervical spinal nerves (as in the previous case, the suffering specifically concerns the roots or the immediately following nervous tract).

Bilateral cervicobrachialgia: is it possible?

As a rule, Shoulder pain radiating down arm to fingers is unilateral, that is, it affects only one side of the body.

However, in rare cases, it can also be bilateral, with the patient experiencing overlapping symptoms on both upper limbs.

Failure to treat cervicobrachialgia leads to an aggravation of the symptomatological picture (eg: the pain becomes more intense, the tingling becomes unbearable, etc.), so that even the simplest manual activities (clearly with the limb) are difficult – if not impossible – superior concerned).
In such circumstances, the inability to perform the most trivial manual activities can have negative repercussions on the patient’s psychological sphere (discomfort, depression, mood decay, etc.).

Figures in the medical-health sector who generally deal with a disorder such as shoulder pain radiating down arm to fingers are the orthopedist, the neurologist and the physiotherapist. Often, a collaboration between these professionals can help overcome the problem successfully. Following an ankle sprain or injury, strengthening and stretching exercises should be performed once you can bear weight comfortably and your range of motion is… I’ve thought about looking for a rehab center near me before. I had major issues with alcohol at one point, not to where it wrecked… 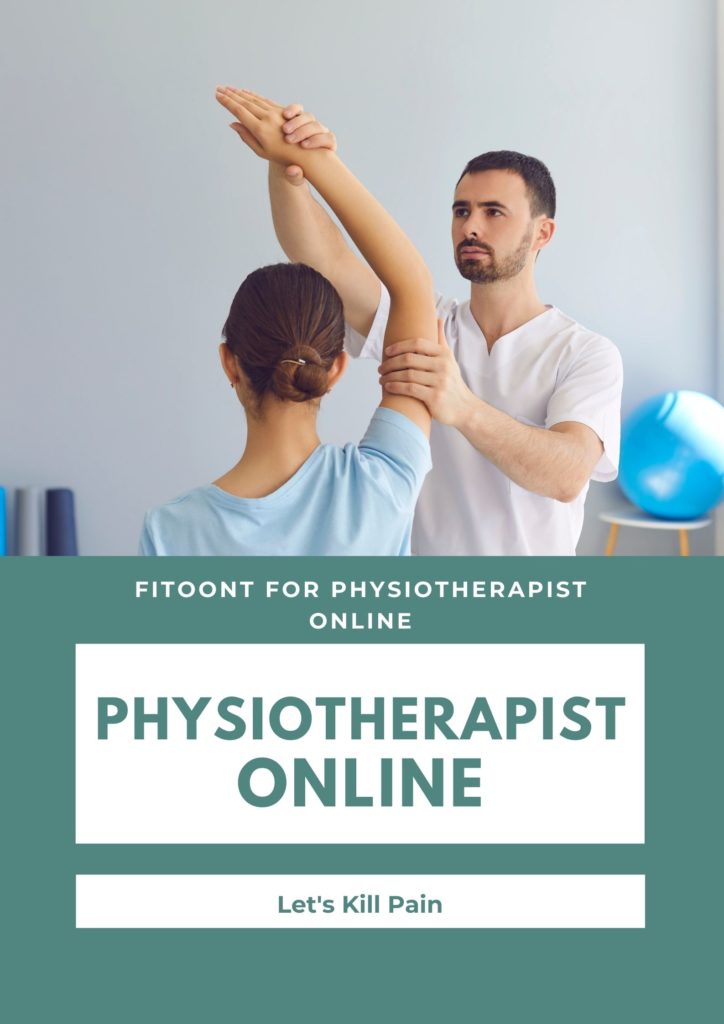 If you are tired of going to the hospital or there is no clinic near you for weight loss, here are the best telemedicine platform for burning belly fat for free.